(Hoover, AL)  Hi 78  Lo 53 – Rain is expected tomorrow, so we decided to take a drive around Birmingham today. We headed out around 11am for the 15-mile drive east on I-459, then north on I-65. Birmingham is what I consider a medium size city, with a population a little over 200,000. It has an modest but attractive skyline. 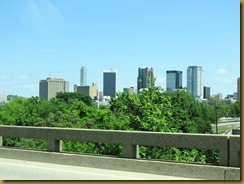 There really isn’t much in Birmingham to see as far as touristy things we’re interested in, so we drove around the downtown area to get a flavor of the city. The only sites we had targeted to see were two sports facilities. First we drove to the west side of town to see Legion Field. It’s a football stadium that used to host the annual Alabama vs Auburn game. Now it’s used for the occasional small college game. 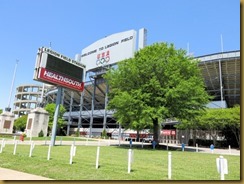 A nice security guy let me in through a gate so I could take a picture of the inside. 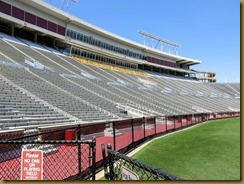 We have a little personal history with this place. Back in 1971 when I was stationed at Columbus AFB, Mississippi we drove to Birmingham to see a Billy Graham crusade in this stadium. I must say, the place has seen better days. It looks as if the city doesn’t have much interest in keeping it up.

After that we drove another mile or so to a place I was really interested in seeing, Rickwood Field. Rickwood Field is the oldest baseball stadium in the U.S. and has been in continual use since 1910. 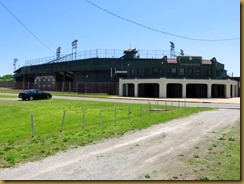 Rickwood was home to the Birmingham Black Barons Negro League teamg, and also the current Birmingham Barons franchise through the late 80’s. The Barons play one game per season here, the Rickwood Classic, which keeps the “continual use” streak going. Here’s some information about it on a plaque out in front of it. 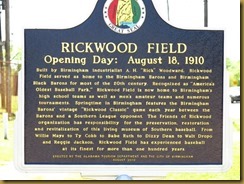 For an old baseball fan like me this was almost like heaven. They keep it open so fans can do their own walking tour, guided by a nice pamphlet available at the front gate. We were able to walk all around it, including on the field. Here’s a few photos. 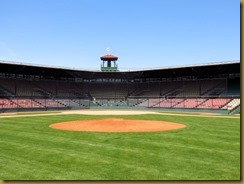 Those are the original light towers built in the 1920’s, making Rickwood one of the earliest minor league ballparks to host night games. 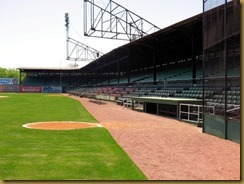 Makes me want to watch the movie “The Natural.” 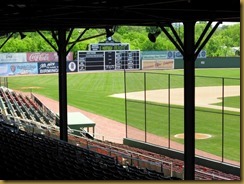 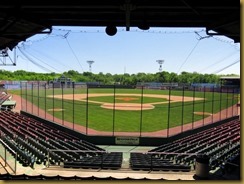 The concourse area has several photos of some of the great players who played at Rickwood. 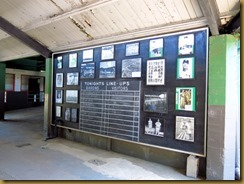 I love the old ads on the outfield wall. (Click on photo to enlarge.) 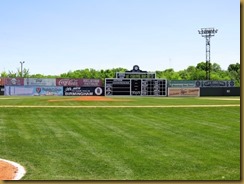 That was sweet! We wanted to see a movie this afternoon, so we headed back to Hoover. We had a couple of hours to kill before showtime so we walked around the Galleria mall and had some lunch before driving a few blocks to a Carmike Cinema see “Oblivion.” 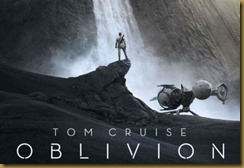 It’s a very involved science fiction movie, with awesome special effects and a complicated plot. The plot is supposed to make you think. All it did for us was make us ask each other, “Do you know what’s going on?” It’s one of those movies that would benefit from another viewing (or two). We recommend it though. Of course, there’s Tom Cruise, who’s always fun to watch.

It was about 6pm by the time the movie was over, so we went to dinner at a place recommended by our neighbor in the RV park, Jubilee Joe’s. 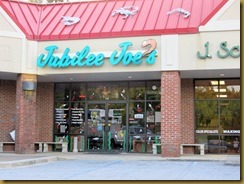 Our tummies nicely stuffed, we came home to relax for the evening. The rig was hot inside because we forgot to open some windows before we left this morning, so we turned on the air conditioner to cool it down. A few minutes later half the ac power went out, just like the other day. I flipped some inside breakers off and on and it came back on. Just for kicks I went outside and switched us over to 30-amp to see if it would make a difference. Nope, the power went out again soon after we switched on the air conditioner. This time flipping my inside breakers didn’t help, so I went outside and flipped the breaker in the pedestal off and on, and the power came back on. I’m hoping it’s too low amps coming from the pedestal. But I’m puzzled as to why only part of the RV power goes out. Any electrical experts out there with any ideas? If so, please leave a comment. I sure hope it’s not a problem with our electrical system. I guess we’ll know Thursday when we move to a new park. Wish us luck!

I think Rod is on the right track. I would unplug the shore power cord and then open up the box where the cord attaches in the RV and check to see if all the wire connections are tight.

A loose connection would cause the symptoms you have. Won't cost anything to check.

Happened to us and it turned out to be a bad breaker in out coach panel. The top post on the breaker had shorted out from wiggling and had almost burnt completely up. A new one fixed the problem.