(Destin, FL) Hi 83 Lo 68 -- We were up early because it was to be a long (for us) travel day. As usual while Jim was getting everything ready outside my job is to pull in the slides. I pressed the button for our doorside slide, but nothing. The slide did the same thing it did in Texas, a grinding sound and not moving an inch. This is the third time we've had trouble with this slide. :(  The first time it was "adjusted," and the second time the gears were replaced.

Jim went to the office to find out if a mobile service is available in this area, and I brought everything in from the car. We knew we wouldn't be going anywhere today. It turns out there is a guy nearby who makes service calls. He (Mike) came out an hour later and climbed under the rig to check things out. After a lot of looking, probing, and mumbling (he was quite the mumbler), he finally diagnosed the problem as a broken mounting bolt sleeve on the slide motor. 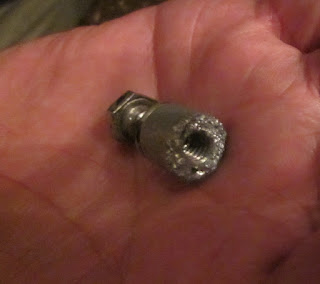 The fat object is the sleeve that's normally part of the slide motor, and the bolt you see goes through the frame and into that sleeve. As you can see, it's sheared off. That's one of four mounting bolts, so the motor isn't bolted down tight enough for the slide to work. Is it possible the guy who replaced the gear set a month ago in Texas tightened the bolt(s) too much? Sure. But what can we do? That's one of the big downsides of being a full timer and traveling constantly, we're not around one place long enough to have someone re-fix something they messed up. I felt this is a repair best left to a quality RV repair shop, so we had Steve manually crank the slide in and we'll live with it in until we're able to get it fixed. With our floor plan it's only a minor inconvenience as far as livability. But it's very frustrating to have to have it repaired again. Our extended service plan paid for the last repair, and the contract specifically says they won't pay to repair the same component a second time. So this one will be on us. But like they say when something like this happens, you need to adapt and overcome (and bring money).

So we're here for one more night. I didn't feel like cooking so we went out to dinner. We went to Fuji Seafood Buffet. It sure was good! There were all kinds of seafood, salads, fruits and even ice cream. We're glad we went.

We'll try again to leave real early in the morning. I just hope I get more sleep than I did last night.

Oh, No! Not the slide again! I hope one day you will get a permanent fix.
Happy Trails, Penny

We feel your pain. Our satellite took all day to install, so we're asphalt camping at the Camping World again tonight.

That's exactly what happened to us in Woodburn, Oregon. I don't know why they use bolts. We had both of them replaced in the big slide (the one that wouldn't come in ) and had them replaced with shear pins. Never had a problem after that.

I think to call them "slides" is almost an insult, they sure don't.

I think to call them "slides" is almost an insult, they sure don't.

Oh bummer! At least your floorplan still works with it in. I know my mom's ruined slide motor was $900.00! Ouch! (she caught a throw rug under the slide and burned out the motor tryi.g to un-jam it)

Hope you have a better day today and that you find a place to repair your slide soon.

Not fun at all. I hope that the next fix will be the last one.

Oh no, not again! It's extremely frustrating when you're ready to leave and you can't. Hope it's quickly, and finally, fixed soon!

It is amazing how they cannot design those things to work better. At least you were stuck in a nice area. We just bought a house not to far away in Navarre.

My what fun you have had with your slide.