Checking Out Sebring, and Other RV Parks

(Wauchula, FL) -  There’s no rain,  just windy and a few clouds, so we got out and about fairly early this morning.  We'll be here six months, so we want to see what's around our area.


Jim mapped out a circular route starting here in Wauchula and traveling to Avon Park, Sebring, and back.  When we saw an RV park sign we turned in and drove around, mainly to see if they can handle big rigs, and to get that important first impression of the place.  We’re not likely to stay in any of the parks close by, but it's fun to look around and make notes for the future.  One place we wanted to check was the SKP Resort just south of Wauchula (actually in Zolfo Springs).  It’s for Escapees RV club members.  It’s a Co-Op park, where you buy the lot and pay a yearly maintenance fee.  The lot belongs to you, but you can also rent it out if you’re gone awhile.  If we wanted to stay the whole winter and travel during the summer it would be ours anytime we wanted it.  It seems like a win-win situation.  We’re discussing it and may put down a deposit for a site. There's a pretty long waiting list (about 8-10 years they tell us), that’s the downside, but in the meantime we can travel around and get our money back if we change our mind later.  Here's a few pictures of the park. 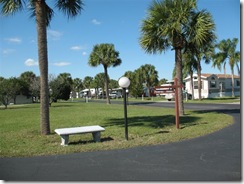 By the time we got to Sebring we were pretty hungry so we stopped at a small local lunch place and had the best gyros we’ve had in a long time.  Now we’ll have a favorite place to eat when we're in the Sebring area (which will probably be often, since it's the closest town big enough to have decent shopping and movie theaters).  We really liked Sebring, nice and clean with everything you need.  I had a Gyro and a greek salad; what a delicious lunch!

Being race fans, we had to visit Sebring International Raceway.  They have a famous 12-hour endurance race every March.  It's a huge (3.7-mile) road course that uses the runways and taxiways of a WWII bomber base.  We got to drive around the grounds. We're not real interested in attending the race now that we checked it out.  There are no grandstands to speak of, only small mounds located at different areas of the track.  But you can't see the whole track from any one location. We'll stick with NASCAR.  :) 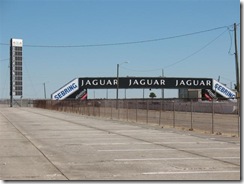 On our way back home we drove through Highland Hammock State Park.  We normally don’t like state parks.  We've seen some nice ones, but most of them are just not our cup of tea.  This one included.  The campground was practically enclosed by trees.  I’m not fond of a lot of trees around, and when you get the moss hanging and swinging in the wind like today, it’s down right real creepy.
The road going into the park

This picture isn’t as dark as it felt, but the road had a washboard surface so you couldn’t go over 15 mph, and it’s miles before you see any houses or anyone to help if you had an emergency.  We’ll pass on this park,  but I’m sure others would love it.

We made it back home around 4:30, had some dinner and settled in for the evening.  Me in the chat room and Jim watching the Hurricanes hockey game.

The space shuttle launch was scrubbed until November 30, so we still have that to look forward to.  We’re also making plans to meet up with some friends while we're here.  If anyone wants to be in Florida come on down.  Tonight the temperature will get down in the 40’s, but that’s only for a night or two.  That's the great thing about Florida.  It may get cold occasionally, but it usually doesn't last long.


NOTE:  There was a comment about the photo of the Kendal Dr. street sign. It does look like gun shots, but it’s some sort of growth.  I guess I’ll be a good resident and take some cleaner and clean it off someday.

Sounds like you had a good day of exploring. (I love Greek salad!)
Blessings, K

Hi Dee and Jim
I finally found you on Facebook. Looks like you've found a nice area to spend this winter!!! I'll stay in touch now between your blog and Facebook. Take care and enjoy that warmer weather....also geocaching girl!!!!!

In the old camping days I used to like treed, shady campgrounds. Now that we're addicted to satellite services, the open sites are what we look for. Tastes do change.

Are you going to do Daytona in Feb?

What restaurant in Sebring did you get the gyro and greek salad?