In Elkhart, Let the Party Begin!

(Elkhart, IN) -  We took our time getting ready to move to Elkhart this morning.  After checking emails and having breakfast we got busy.  From the beginning of our departure routine to final set up at Elkhart Campground it took 2 1/2 hours.  (The move was only 20 miles.)  The Gypsy Journal rally was here last week and some of our friends from the Class of 2007 and RV-Dreams have been here for a few weeks.  We'll be here until Friday, when we'll return to Goshen for the Escapees Escapade, one of the biggest RV rallies in the country (around 800 RV's).

Lynette and Greg  met us at the office when we arrived.  They told us what site to get, which was right behind them.  There were several rigs coming in at once and lined up along the road.  After some socializing at Greg and Lynette's with some of the gang, we went to dinner at Culver's.  We hadn't been to Culver's since we left Indiana Dunes, and it was great to go there again..

Later this evening about 14 of us got together at the clubhouse to play the card game "Hand and Foot."  We had two tables of four each, and one table of six.  We learned the game a few weeks ago, but it was a different, and easier, version that we played tonight.  It was a lot of fun and we had some great laughs. 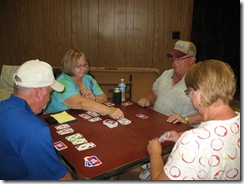 This is the start of a very active couple of weeks.  We'll have a lot going on, so stay tunes!

Happy hours and eating out! Have a great time.

I really enjoy reading your posts in the morning. We sold our RV last year & bought a permanent Park Model in a retirement park in Florida. I miss the travel part but health got in the way. I love traveling vicariously with you both. Have a great day. I started a blog last week- so I'm still finding myself.

Looking forward to all the fun and pics and great stories.

You guys are sooo close.....We are just down the road a piece in Delphi. Hope you all have a great time!

You guys and Culver's. Lol