(Goshen, IN) – Trains, and train whistles, that’s all we heard all night long.  Not one but several trains and even two at a time on the tracks behind us.  I’m a light sleeper, the kind that will wake up if a cat walks across the floor above us in another apartment.  Needless to say, I didn’t sleep last night.  I’ll get use to it.  I’m going to use the sound machine tonight (white noise maker) to try to drown out most of the noise.  It was foggy when Jim got up so maybe the train whistles weren’t a normal thing.

We made arrangements for my nephew and his wife to come see us.  We always try to see him when we’re in the area.  We had a great visit and got caught up on everything he’s doing.  We’ll get to get together again on Labor Day with more of the family.  Dave and Tina, thanks for coming over.

Later in the afternoon we went up to Elkhart for "Happy Hour" with some RV’ers that have come in for the Gypsy Journal rally.  Many of them will be coming here to Goshen for the Escapade in two weeks.   We met many of them at the RV-Dreams Rally in Branson, MO in 2008.  You can read more about that rally in the blogs of June 2008 in the archive.

We had a potato fest.  Each couple brought two potatoes and a topping, then we all enjoyed fully loaded baked potatoes.   A couple of cakes and ice cream were brought for dessert.   What a great time of joke telling and fellowship.  It was great to see old friends again, and to make new friends. 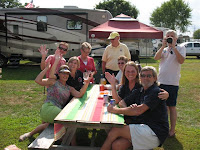 Mac is telling a joke that involved audience participation.

Dennis Hill of the RV Driving School told several funny stories about some of his trainees.

What a wonderful day!  There’s nothing better than traveling and being with friends.  The mosquitoes started to make their presence felt, so under a full moon we headed home.

Don't envy you with that train noise. I love the idea of a potato fest. I'm going to remember that. A postato and a topping, or two potatoes and two toppings. If you have a few minutes, come by and meet Jonathan and Nellie Tate - The Midlife Cruisers at my blog - A Camp Host Housewife's Meanderings http://acamphosthousewifesmeanderings.blogspot.com/. Take care...

Oh it looks like you are having a blast with everyone. You should be so pooped out at the end of the day, flopping into bed, you won't even notice those train noises! LOL