(Chesterton, IN) –  It rained all night long and we thought it might rain all morning, but by the time we left for son Rick’s to the West, it cleared up.

We went to see our step granddaughter Ellice play a scrimmage game of field hockey.  It’s a fairly fast game that looks like a little like lacrosse, except you hit the ball across the ground instead of in the air.  We know nothing about the rules, but it’s very entertaining to watch.

Ellice is third from the right. 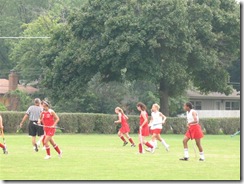 Grandson Jack wanted to play golf, so Rick and I joined him while Ellice's game was going on. Jack would hit the ball and I would fetch it.

Rick also was teaching Jack how to be a photographer. His pictures turned out really good.

We went back to Rick's and had some lunch, and then we painted Ellice’s room.  All the rooms in the house are light gray.  They moved into the house the beginning of summer and are now repainting the rooms.  Ellice chose a light blue for her room.  I did the trimming. 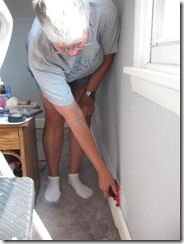 I should have been a painter, I really like doing it.  We put on two coats, so it looks real nice.

We left early evening to get back home to clean up for tomorrow’s last get together.  We also watched the NASCAR race in Bristol.

I used to love painting and was very good at it - then something happened and it was no longer fun. I think my eyesight got to the point where I could only paint in natural light, which limits the amount of time you can devote to it. Glad you are enjoying it.

I'll save our painting till you guys get here! LOL

I know who to call when there's painting to do...oh wait..will there be painting to do in a fifth wheel? Hope you enjoyed the race...Robert wasn't happy that JJ was out of the race early on since he had him picked as one of his Fantasy Raceday picks. One day we hope to attend that one! K

Hay, if I knew you liked painting, we could have done a lot of that! The dinning room, living room, entryway, bedrooms, kitchen. Man, I'll catch ya next time your in this area!