We got up and got ready to go to our son Rick’s place, which is about an hour away.  The family is Rick and Laura, our grandson Jack from Rick's previous marriage, and our step-grandkids Joey and Ellice.
They live in Homewood, Illinois, which is about 25 miles south of Chicago.  It was wonderful to see them again... we haven't seen them since their wedding a year ago.  After we arrived, we went to their local Homewood Funfest, an annual town street fair. 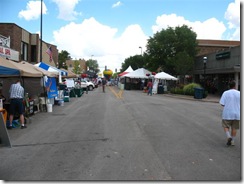 Ellice was in a dunk tank to earn money for the hockey team she’s on.  Her brother had a ball dunking her a few times. 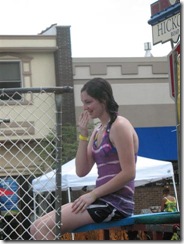 Joey loves comic books so we visited a nearby comic book store.  While Joey was discussing comic books with the guy at the counter, out from the back room out came Bat Man.  Jack loved it and got his picture taken with him.

We drove the truck instead of my little Toyota because Rick needed to return a sectional sofa that they bought but couldn't fit through the entrance to their basement.  So Jim, with Rick's help, removed our fifth wheel hitch and loaded up the sofa.

While the men returned the sofa, I stayed behind.  Grandma just had to play with the boys.  We played video games awhile, but then decided we’d play shoot 'em up with little guns that shoot foam bullets.  I did some running around hiding and shooting the kids (and getting shot myself!).

I also played hockey with Jack. 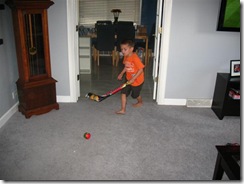 We decided to go out for pizza. 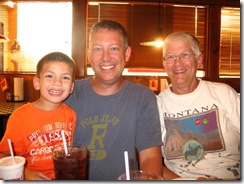 We got home a little after 9:30pm.  It was a great time today.  They're coming to our place tomorrow and we plan to grill some hot dogs and swim in the lake.  Can't wait!

Great family day, love the pictures of Grandma playing with the Grandkids, Life is good, were chomping at the bit for Saturday to get here so we can head out for our vacation. Be safe out there. Sam & Donna.

What a fun day you had with the kids. I know you and Jim are enjoying every moment of this retired life.

We all are so blessed.

You guys have spent more time with the grandkids than you have in years! Isn't the RV life great!!!!