Aggravation finally got the best of me this morning.  I've been  moving glasses and bowls around for six months when I want to get one or the other. I've also seen a few ants, so today I changed the kitchen cabinets and checked for ant entry.  I rearranged a few things and took out a few items we haven't used.

A status report on our full time lifestyle:

Six months ago we moved into the RV full time.  We left the apartment and moved our food and belongings into the RV, leaving everything else in one place to sell.  We've learned a lot and still have a lot more to learn, but we're pleased with our new home.  Although we had a few bumps in the road, overall we feel we did the right things and are very happy.

We've had some questions about our financials. We've been running a little over budget for the first few months, but a lot of that was because we were still making "start up" purchases - things we feel we needed as part of the full time lifestyle (for example extra hoses, electric adapters, water filter, etc.).  Now that we pretty much have all of the necessities we're getting back on track.  We've learned real quick that food is our major concern, and we can't spend money dining out like we used to without cutting way back on the groceries. We're still looking for that happy balance between eating in and eating out.  Fuel has been less than we thought it would be.  Fuel prices have come down slightly since we started on the road, and having my small car has really been a benefit.  It's a lot less expensive to drive around than the truck would be.  Campground costs have been all over the place!  Places we've stayed ranged from about 5 dollars per day to 35 dollars per day.  But overall we're within the amount we budgeted.  We're still feeling our way as far as adjusting our lifestyle to our budget, but we'll get better over time.

We lived in the RV the first three months at one spot near Raleigh, NC until Jim retired from his job, so although we were full-timers we weren't ON THE ROAD until March 6.

We became Florida citizens.
We get our mail at My RV Mail in Crestview, Florida.
We've stayed in 12 campgrounds and three weeks near my sister in her neighbors' backyard.
Our home suffered some accident damage early on, and an internal water leak caused by lack of sealing in the utility compartment.  All repairs were made by our dealer.
We have our plans made through April 2011, but that's, as they say, in jello.
We love the full time lifestyle and can't wait to see more of our country.  This first year year was dedicated to spending more time with our family.
We have met many wonderful people along the way and have almost decided what our "it" factor is for RV parks.

I sprinkled Comet around the wheels and landing gear to keep ants away. They sure don't like Comet, they take off in the other direction.  It's not like we're getting a lot, but enough that I don't want more coming in.  We're moving to another site here in this park on Thursday, so we'll see what happens in our new site with a good line of comet around the RV.

Jim did the laundry while I was cleaning.  We were going to go out, but by the time we wanted to go a severe storm came up. It rained so hard we couldn't see the next door neighbors.  I noticed after the storm four  rigs had left. I didn't see or hear them go but thought that was good timing. Maybe they left before the storm and I just didn't notice. It was as if they "blew away".  Now it's all empty except for three of us.

After the storm, there was a lot of bird noise going on outside the window.  This bird was hitting the widow and sitting on our door handle. I looked out on the tree and the baby was sitting there. I don't know what breed they are, but I took a few pictures. 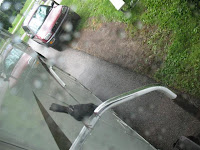 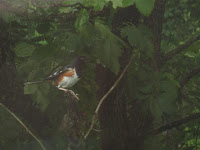 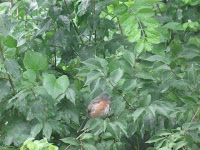 They flew around for a few minutes then disappeared out of sight in the woods behind us.

The rest of the day it was a little cooler, dropping from 90 to 75. I couldn't breathe from the humidity when I went out to put out the Comet. It's as if someone was sitting on my chest, and taking a deep breath was almost impossible. I seem to be having more difficulty breathing lately in this humidity. When I see the doctor again I'll ask why that happens.

We have a full day  planned tomorrow.  Stay tuned, it should be a goody.

Speaking of comet ... I think I recall reading somewhere that you should never use cleansers in an RV sink because it can destroy the seals. Is this true?

What about SOS on the pots and pans?

I've been wondering about this for awhile even though we don't have an RV yet.

Glad you feel good about your decision!

Hope the bird was okay. I think he is a Towhee. Sometimes they peck at mirrors because when they see their reflections, they think it is another bird and they try to chase it off. I've seen Bluebirds and Cardinal's do that. I don't know if this is what your bird was doing or not.

Congrats on six months! Hope the breathing thing gets squared away ASAP!

Congrats on 6 months fulltime! Glad you're still enjoying it. Also glad to see that the Comet worked. You should also put some bug spray on a rag and wrap your electric cable and water hose. I'd also get some ant traps and put them in your cupboards. Unfortunately ants are a fact of life!

This month (18th) we will be full-time for 10 months. Man the time just flies by doesn't it??
Glad you are having fun and enjoying the journey! Hope we will meet up one day soon...would love to meet you guys. :)

Doesn't the pumice in the cleanser settle to the bottom of holding tanks and then become hard to wash out? I think that is what I read about using cleansers in RV's. But I couldn't remember where I read that.
If you could stick a hose in the tank and swish it around it would hose out, but since all you can do is run water down a drain, it isn't fast enough to wash itself out.

Congratulations on completing six months of fulltiming. The first year does have it's share of "one time only" expenses. We, too, have spent a lot of time with family over the past four years and have done less "sight seeing" than we anticipated but, it's been good to have the freedom and flexibility to do just that. Hope to bump into you guys somewhere as you're "Tumbling" along.

Congrats on your 6 month mark! Sure don't seem that long since you were fretting and fuming to get out of that apartment! LOL

We avoid the comet/cleanser too. I use a small square of 3M Scotchbrite for taking off stubborn spots, and sometimes a very small spot of Softscrub if needed.