We both slept later this morning with no place to go and nothing planned till evening. It felt so good to be off the road. We had breakfast at Duncan Donuts, they have great egg sandwiches and coffee. Our son doesn't drink coffee so we go out. We did some grocery shopping for a couple more meals and came back to the apartment.  Rick had to work, so we watched TV and I cleaned a couple chickens for chicken and dumplings for tomorrow's dinner.

We're getting every report about the hurricane Dorian that we can. Jim is watching on the tablet an app from channel 11 news out of Tampa. Denis Phillips. He seems to always get hurricanes right. The weather channel says it's a cat 4 coming into West Palm Beach area, Denis says it's going to skirt the east coast and go to NC. We'll know in a couple more days.

We went to our grandson Jack's soccer game at 7:30.  It's chilly 67 when the sun went down. I'm glad I brought jeans and a jacket. Luckily there's no winds like usual in the area.

Jack is in Blue with foot in the air. He got an assist. The game is the first of the season and they played some big kids in a tournament, they lost, but there's two more games for the holiday weekend. 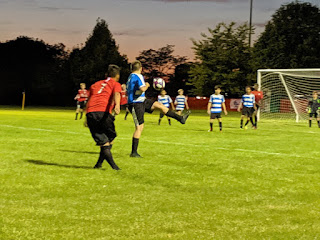 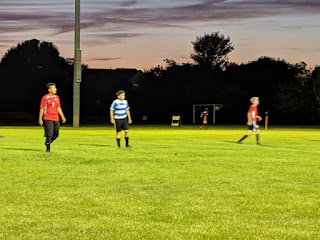