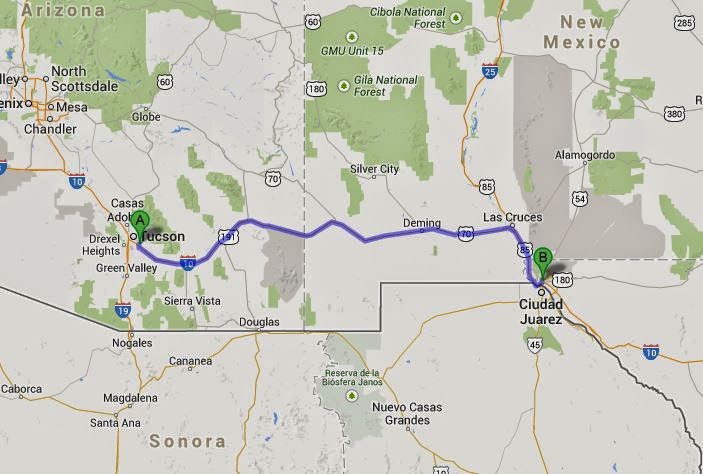 It was a windy, dusty trip. The blowing dust was so bad we could barely see any of the mountains around us. The wind wasn't bad enough to be a danger to us, but I did feel a few tugs on the steering wheel. Here's a few pics. 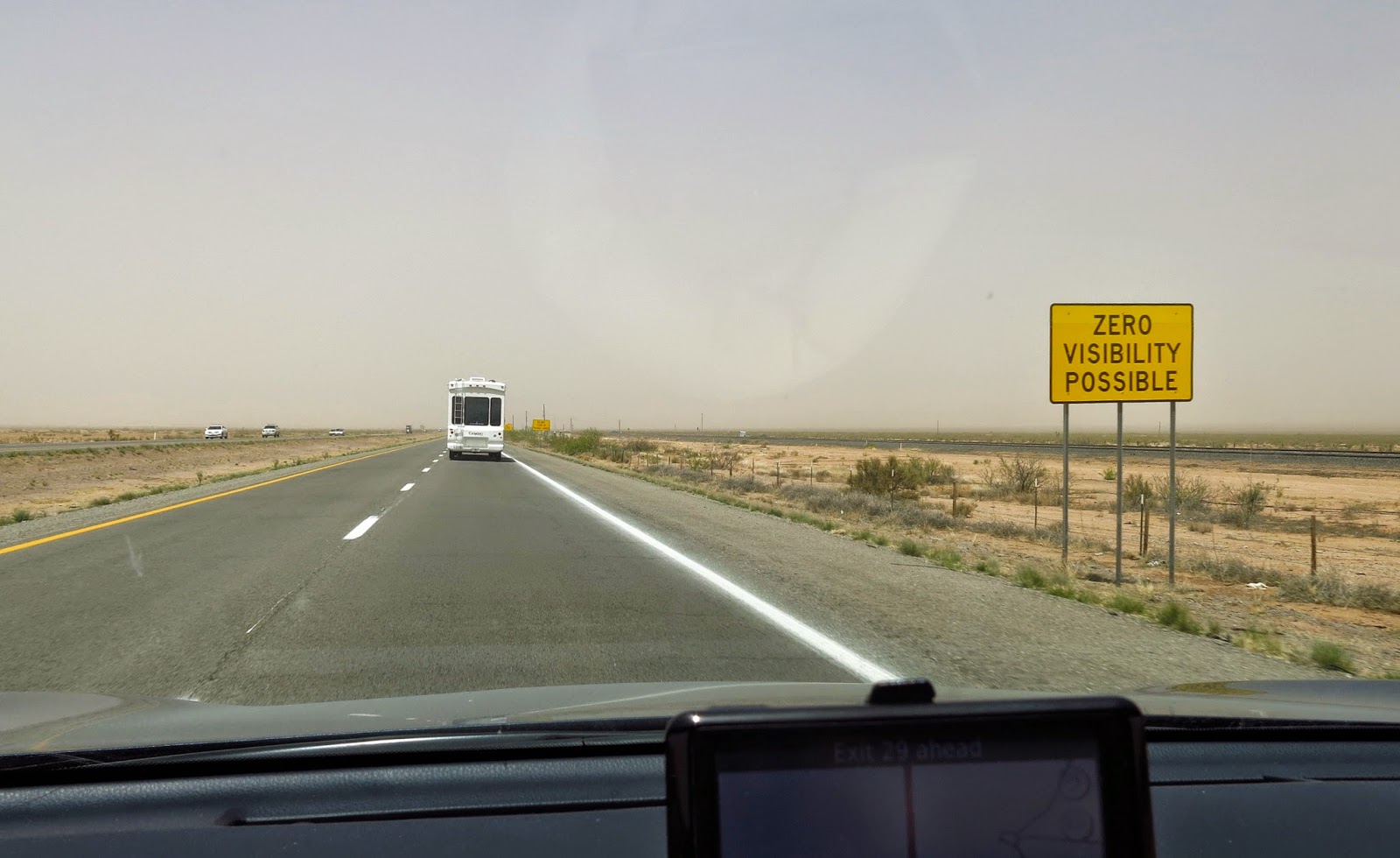 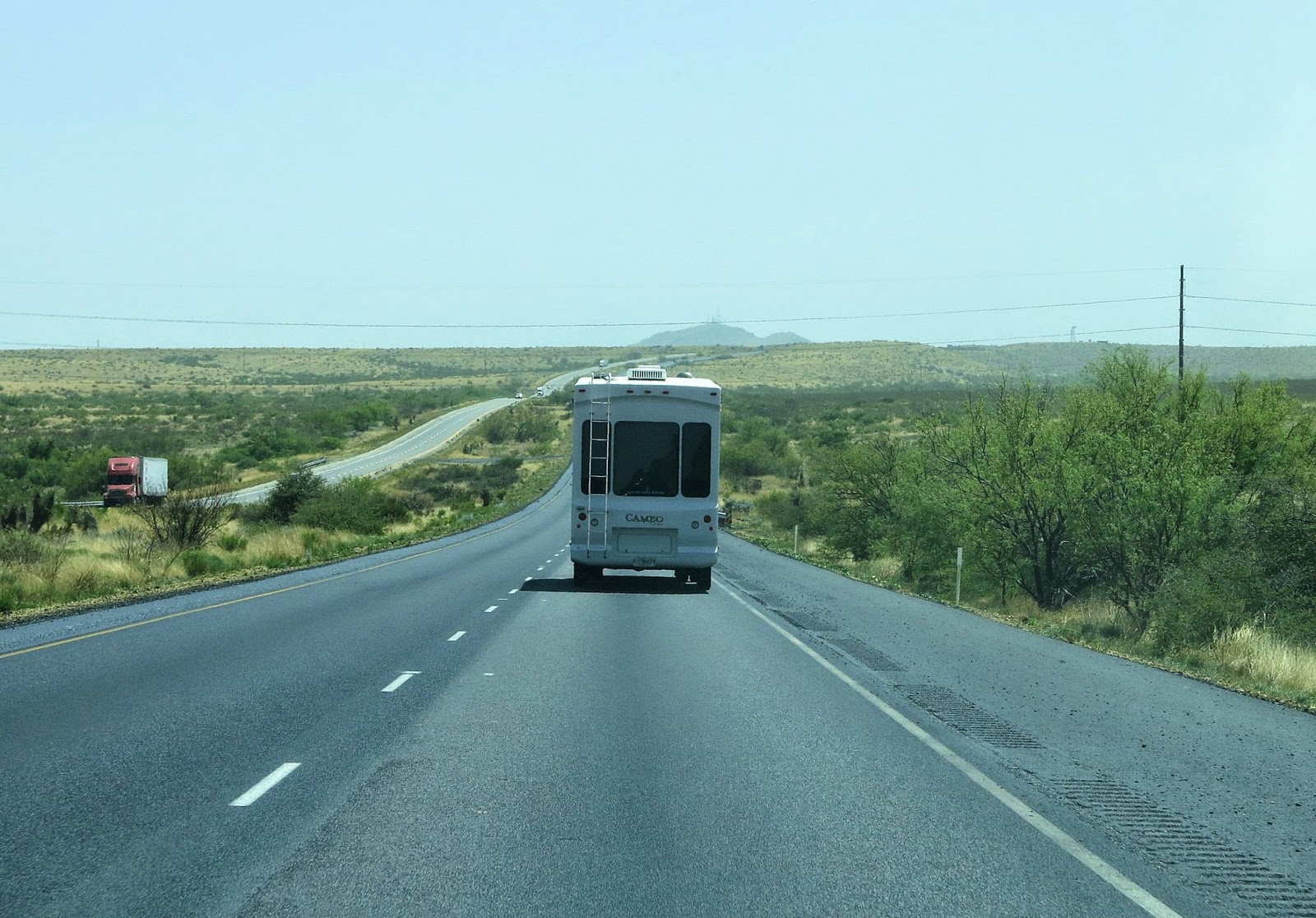 A new state for Tumbleweed! 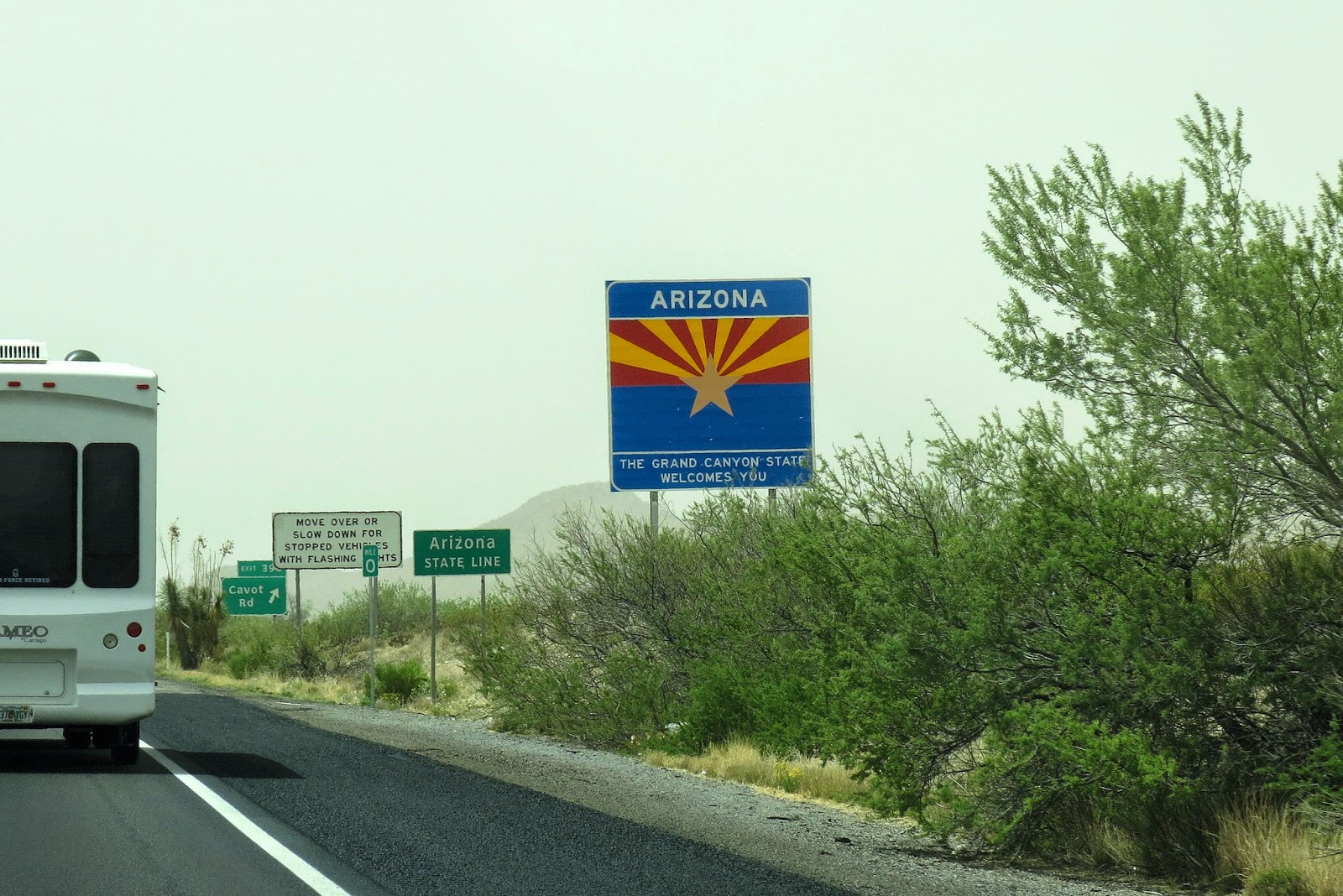 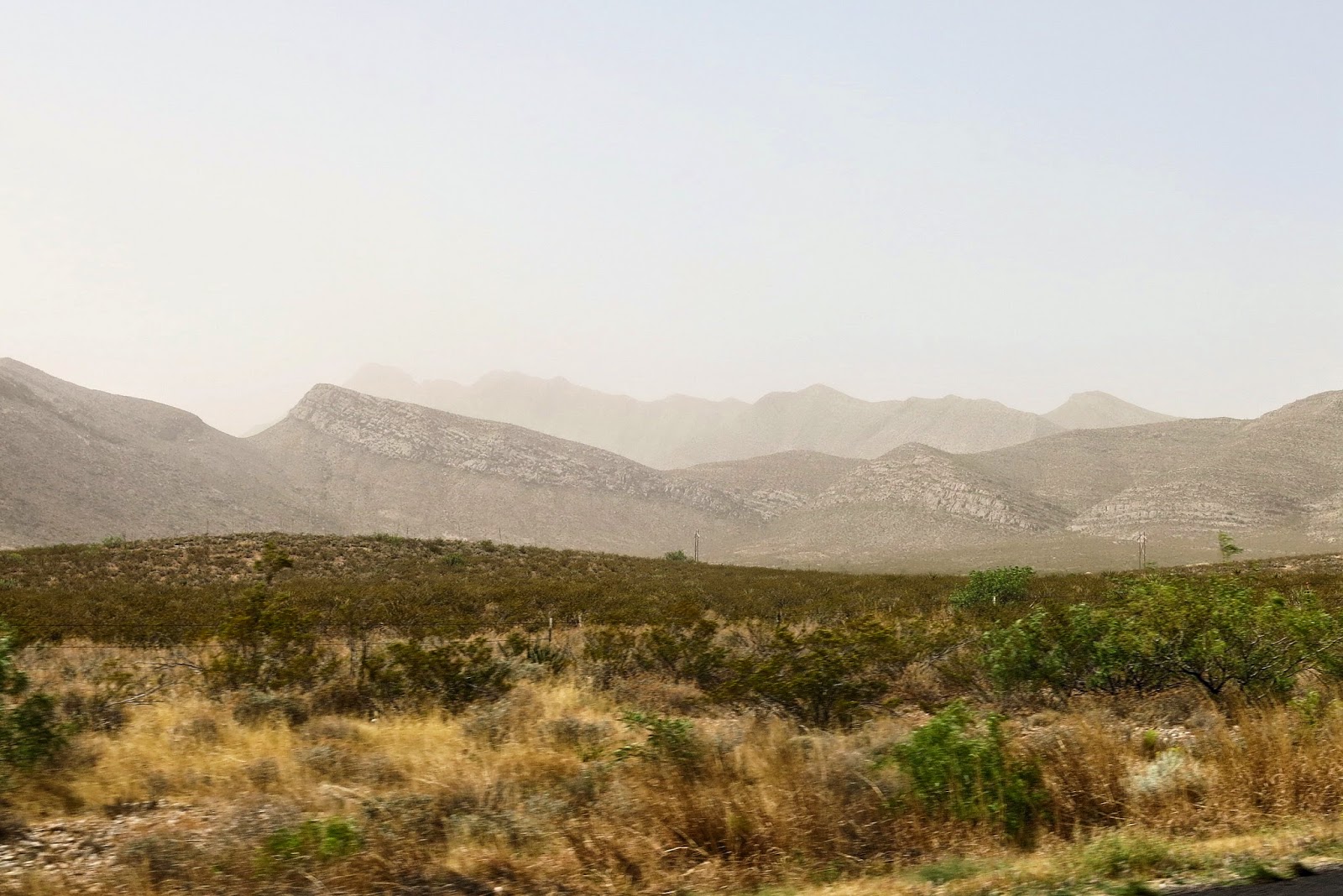 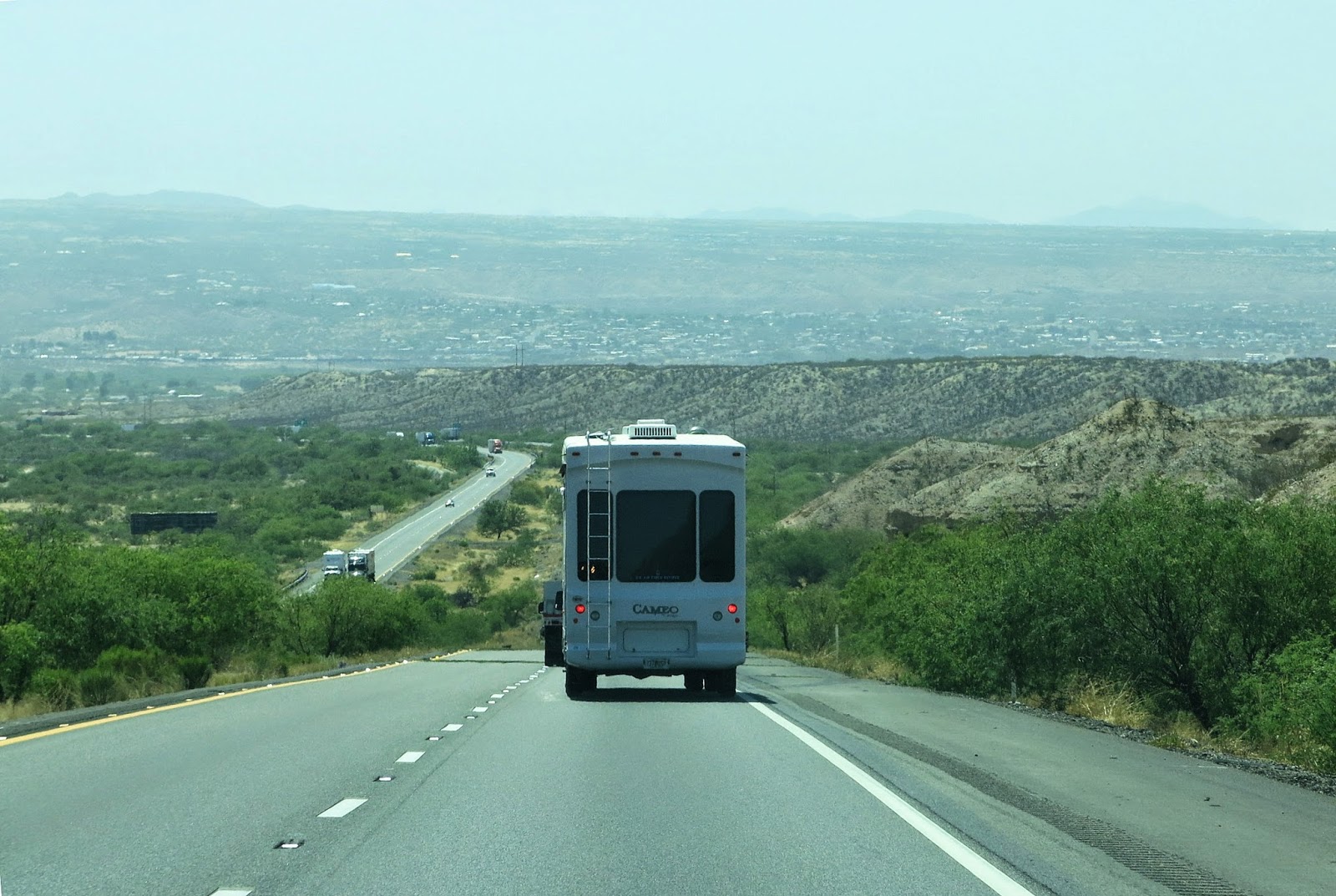 We pulled into Agave Gulch Famcamp at Davis-Monthan AFB around 4:30pm, but it was actually only 3:30 as we lost an hour. Arizona doesn't change to daylight savings time, so we're on Mountain Standard Time. Sheesh, instead of jet lag, we're getting RV lag. :)

We left everything hitched up last night so we could pull out first thing this morning for our appointment at BandC RV and Marine Service, about three miles outside the base main gate. We were hoping our slide problem would be a simple adjustment, but it was not to be. In fact, in a way it was fortuitous for us to have this problem because it brought to light an issue with our other slide (the full wall slide) that could have been much more serious if we let it go any longer.

The initial problem with our smaller slide is broken mount flanges on the slide motor. There are five bolts that mount the motor to the frame, and the bolts go into flanges that protrude about a half inch from the base plate on the motor. Two of the five flanges broke, causing the motor to shift and the gears to become un-meshed. We had that motor installed two years ago, and it's very disappointing that it failed so quickly. The tech thinks it's a manufacturing defect, as he's seen this problem before with this brand of motor (Al-Ko). He does not think it was caused by the wind though. A new slide motor is being overnighted and will be installed tomorrow. The good news is, all but $50 is covered by our extended service plan. Yeah, I know, they already paid for a new slide motor two years ago, but they're going to pay for this one too. How cool is that?

Not, the other problem... Lately when we've been bringing in our big slide it's been leaving a small gap at the bottom of the sides. I asked the tech to take a look at that. The slide has three long beefy toothed rails, spaced along the length of the slide, that the gears turn on to bring it in. They each have a sturdy plate mounted to the inner side of the slide wall. Well, the plate on the middle rail has come loose, and there's about an inch gap between the rail and the slide wall. The tech said if those bolts had come all the way out, it would have caused all kinds of problems with the main structure of the slide. He's going to replace the bolts and make a metal L-bracket to better hold the plate against the slide wall. He doesn't think the problem will happen on the other two rails because the center one bears most of the weight.

While we had the opportunity we had a few other things done. We had a propane leak test done, and we upgraded our house batteries. We were still on our original one 12-volt battery, and it's starting to not hold a charge very well. We had them install two 12-volt AGM batteries. They're more expensive than regular wet cell batteries, but they're maintenance free, which is what sold me on them.

So, we're spending the night in their parking lot. They provided us with 20-amp electric, so we have our TV and computers. The weather is warm (mid-80's) but it doesn't feel that hot. (You know, being a "dry" heat really does make a difference.) They'll (hopefully) finish up the job tomorrow so we can return to our full-hookup lifestyle. We made an appointment at a local Toyota dealer to get the first oil change in the RAV4 tomorrow, so we'll have that to do while they're finishing up on our home. At least the oil change is free. (We got two years of free maintenance when we bought the car.)

We'll post some photos of our RV park tomorrow. See you then.

Glad the repairs are going well and that you weren't stranded anywhere.

We've replaced both ours already also. The problem is that the motor plate that hold the assembly in place is cast Aluminum or Zinc and it's just not strong enough. Luckily our replacements have held so far.
Good luck,

hmmmm will have to have Sam at least look at ours. glad wasnt anything too costly

Sure glad they found the big slide issue before it was too far gone. Hope all goes well tomorrow because it is going to start getting hotter and you are going to need that air running.

You guys have had some fun with the slides haven't you?

The last few months of owning a 5ver gave me an unsettling feeling about the slides, although I hadn't had any trouble with them.