Day 4, Carolina Clan Get Together

(Huntington Beach State Park, SC) Hi 78 Lo 56 -- We got up early, there was a lot planned today, mostly different individuals grouping up and going different ways. After a small group of us sat outside visiting for awhile, Jim, Mike and I went to Five Guys for a great hamburger lunch. (Click on photos to enlarge them.) 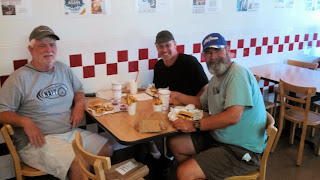 After lunch we stopped by the fishing pier at Murrell's Inlet to walk around and get some sun and watch some of the fishing action. 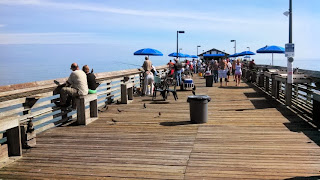 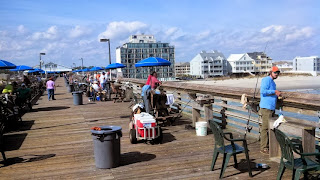 The ocean was very calm looking north toward Myrtle Beach. 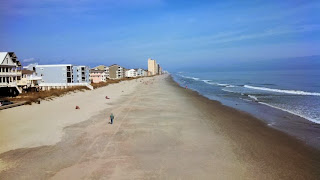 While we were gone Dee went with Terri, Chris, Ray and Linda on a hike along one of the several trails through the woods. They covered three miles in about an hour and 15 minutes.

A couple of sights along the way.

They got back to the park in time to head over to the Atalaya Huntington castle for a 2:00 tour with Howard and Linda. That was basically a bust. The guy kept talking about the history of the family who lived there without describing the castle itself, so they left the tour and explored the house on their own. There were plenty of informational signs so it saved a lot of time.

The road leading to the castle.

The tower, which at one time held water. 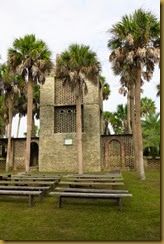 All the windows have iron bars. 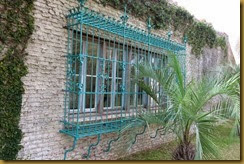 Just one of the hallways inside the castle.

Howard and Linda in one of the rooms.

Everyone was back in time to gather for our annual group photo. We assembled at two giant adirondack chairs that sit near the office. A park ranger was nice (and patient) enough to snap our picture with the many cameras we had on hand. 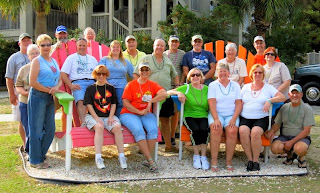 When that was done it was time to get dinner going. Howard came up with the idea of having a "low country seafood boil." We had three large pots of potatoes, corn on the cob, onions, sausage, and 10 pounds of shrimp, all flavored with Old Bay Seasoning.

Laurie cutting up the corn.

Laurie and Linda putting in the potatoes.

Next is the sausage.

Then finally the shrimp

Mmmm, it smelled so good while it was cooking!

Everyone is enjoying the feast.

Paul really cleaned the corn off the cob.

The feast was excellent! And there was enough for everyone to get stuffed. But we all had room for the various desserts that were brought.

Thanks Howard for the idea, and thanks everyone for helping to make the dinner a big success.

This couple walks their "family" of huskies several times a day. They all live in their motorhome with them. All I can say is, "Wow!"

The day ended with the nightly campfire, with lots of stories and laughs. Another perfect day.

Another fun day at the gathering.

That was a lot of good food!

Looks like you are having a GREAT time. Did you have the red and blue eating teams for the Low Country Boil?? ;o)))

We're having a great time eating and visiting and doing other fun stuff!

Love those burgers at Five Guys too.

Lots of good food, we need to be at one of these boils.